← Introducing the 2015 Competitors
Welcome Back →

Posted: February 28, 2015 | Author: Robert Blanshard | Filed under: Looking back, Something else |2 Comments

Essentially, I’ve been away for a good 9 months.   To be completely honest with you, my faithful readers, I just haven’t felt like writing for a while.  But on this lazy, snowy Saturday, I have 4 races to get caught up on.  I have a Le Mans project I’m putting the finishing touches on, and I want to get started on my 2014 Le Mans report.  Before I do, I have two races I need to get to: the 2013 United States Grand Prix and the 2014 Red Bull Grand Prix of Americas.  Channeling my best Billy Mays, act now, and I’ll throw in a 2nd report for FREE.  That’s right – this is a two-fer!

Through my relationship with Grand Prix Tours, I’m working the 2nd United States Grand Prix in Austin.  Having learned a few difficult lessons last year, I’m more prepared to handle my responsibilities.  Unfortunately, many of the details have escaped me over the past year +, but maybe that’s a good thing.  I have my bus assignment at the Austin Hyatt Regency just on the other side of the river, south of downtown Austin.   One morning, I’m standing in the main lobby with my GPT shirt and sign, directing my clients to the bus outside.  Near me is a private driver, a woman, with a sign that reads “Emerson Fittipaldi”.  The two-time F1 World Champion and 1989 Indianapolis 500 winner, I’m a little excited the Emo is in my hotel.  That private driver, keeps looking to her left and right, and has a worried look on her face.  I ask her if she knows who Emerson Fittipaldi is.  Sheepishly, she says no.  I try to describe him the best I can before I offer to help her out.  I’m short a few clients, so I volunteer to head up to the restaurant to look around for our combined clients.  A quick recon trip upstairs, and I don’t find what either of us are looking for.  A little disappointed I couldn’t find Emerson, I head back downstairs, inform the other driver and head to my bus where my missing clients have joined us.  We head out to the track.  The weather is cloudy, but it’s expected the clear up shortly and become another glorious Autumn day.  As we approach the track, it’s eerily quiet.  Turns out the fog is too thick to allow for the medical helicopters so the track is red-flagged.  And from this shot, it’s easy to see why. 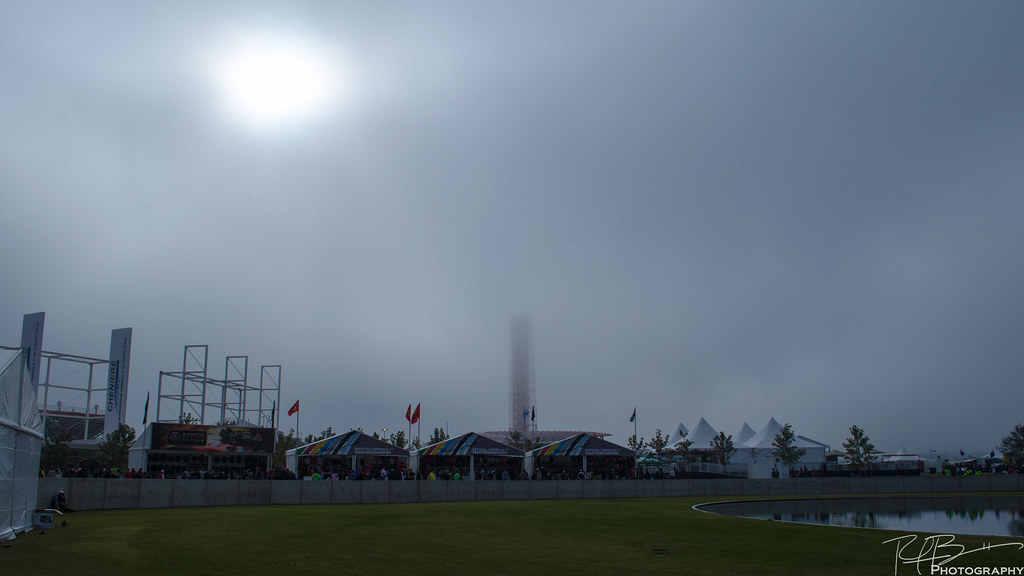 In due time, the fog burns off and we finally get some action on-track. 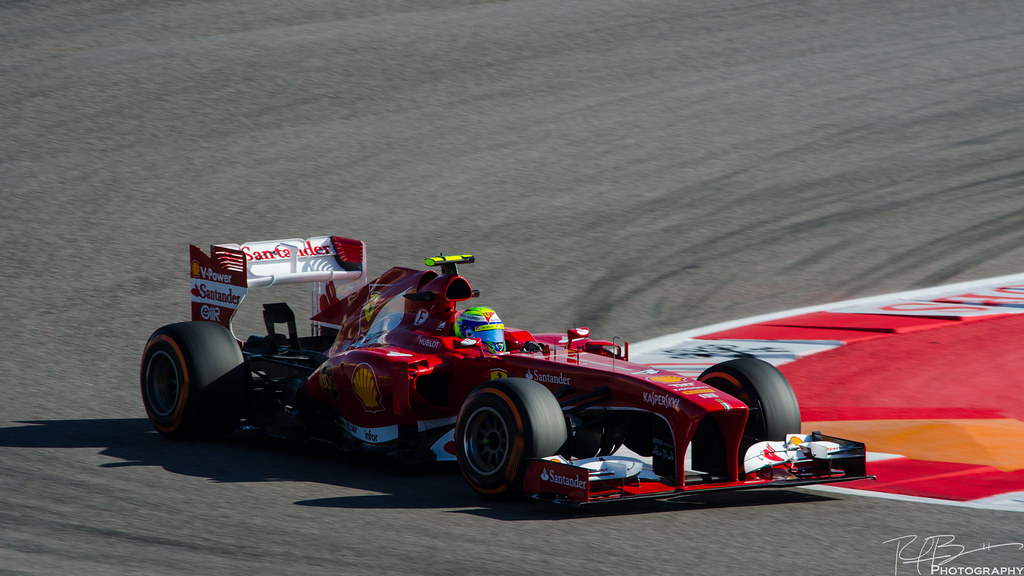 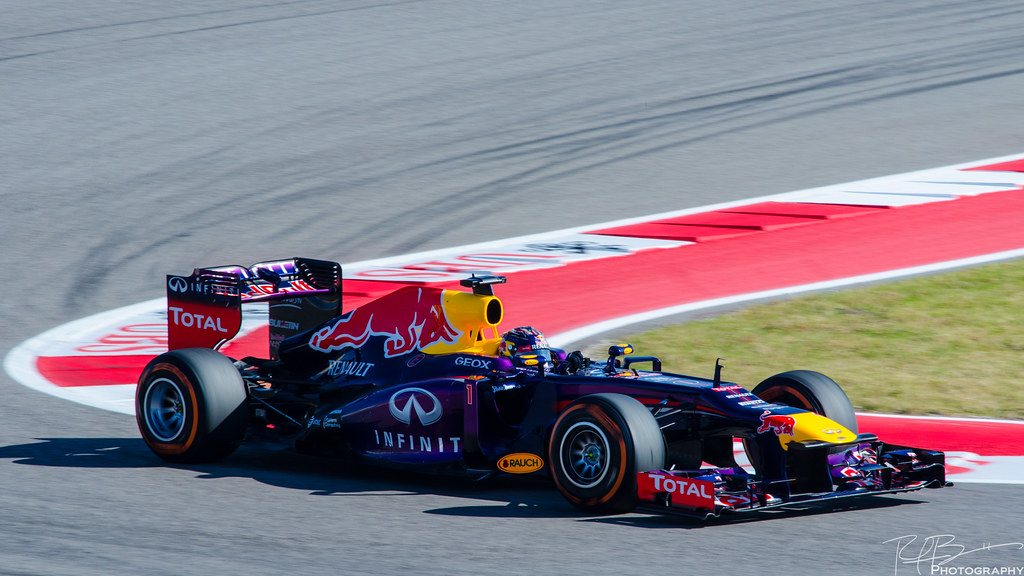 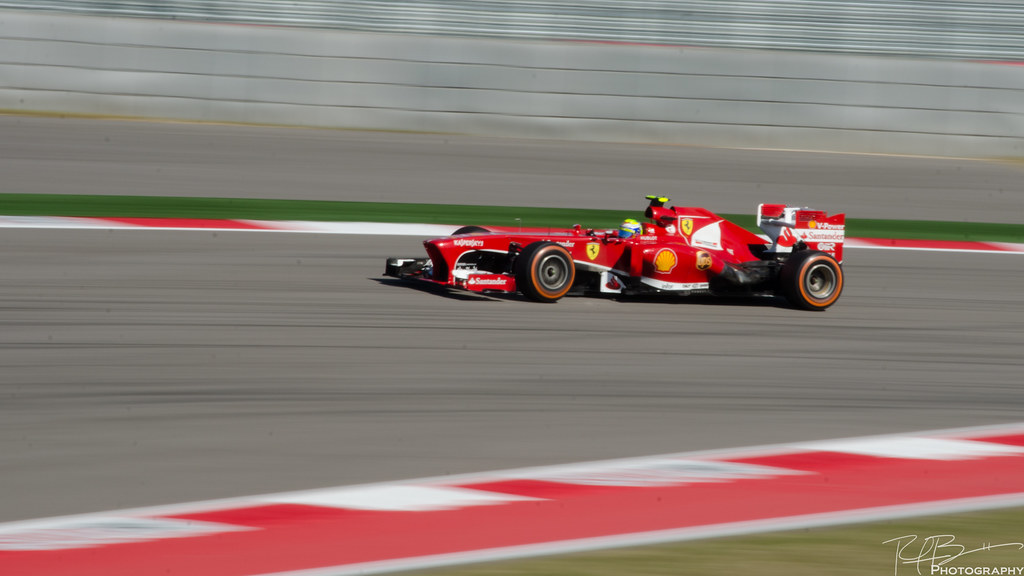 Aside from the fog, Friday is less that memorable.  In fact, so too is Saturday.  And to be honest, so is Sunday.  One of the best parts was catching up with my good friends from Atlanta Kris and Jim, but otherwise, there’s just not much to write about.  Sure I met some interesting people – including American driver Alexander Rossi and BBC commentator James Allen, but the racing was a glorified parade.  Red Bull and Vettel won, but it was just rather unmemorable.  About the most exciting thing that happened was my wonderful GPT co-host, Cherry, asked if I would be interested in working a tour at Le Mans.  Wood eye!  Does the Pope wear a funny hat?  It took me all of 2 seconds to say yes.  More on that later.  Until that report, here’s a photo dump of my favorite pictures from the race weekend. 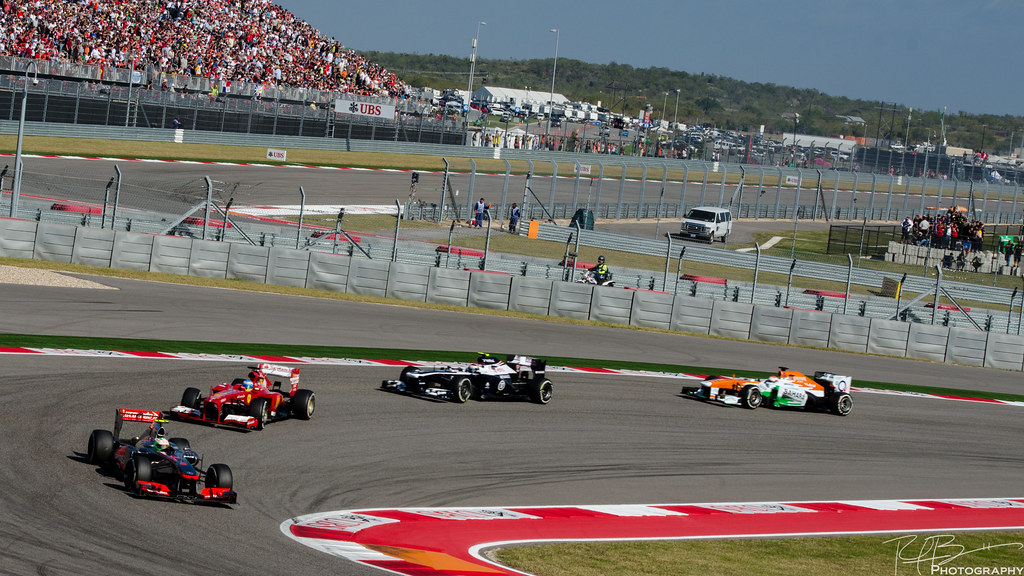 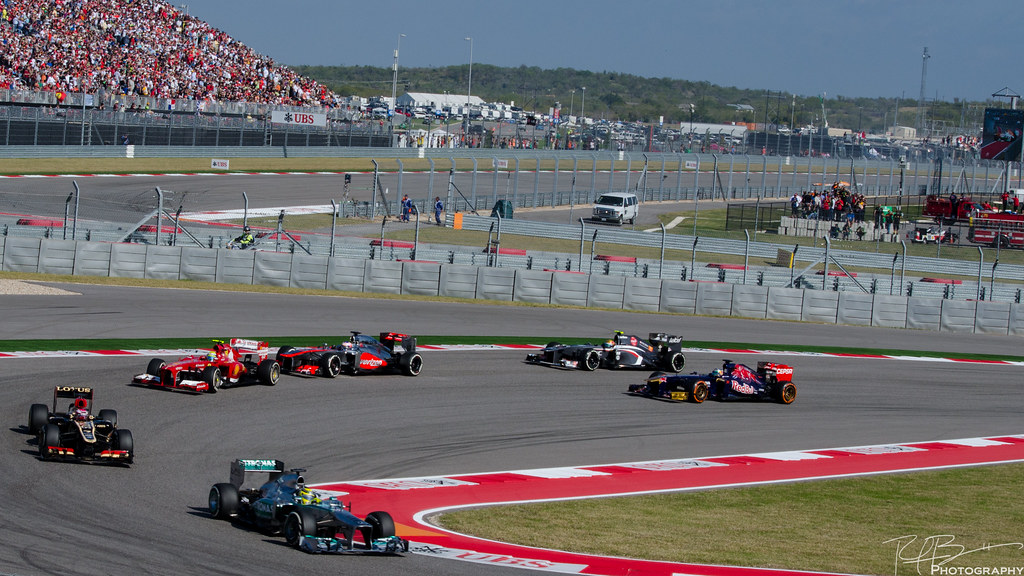 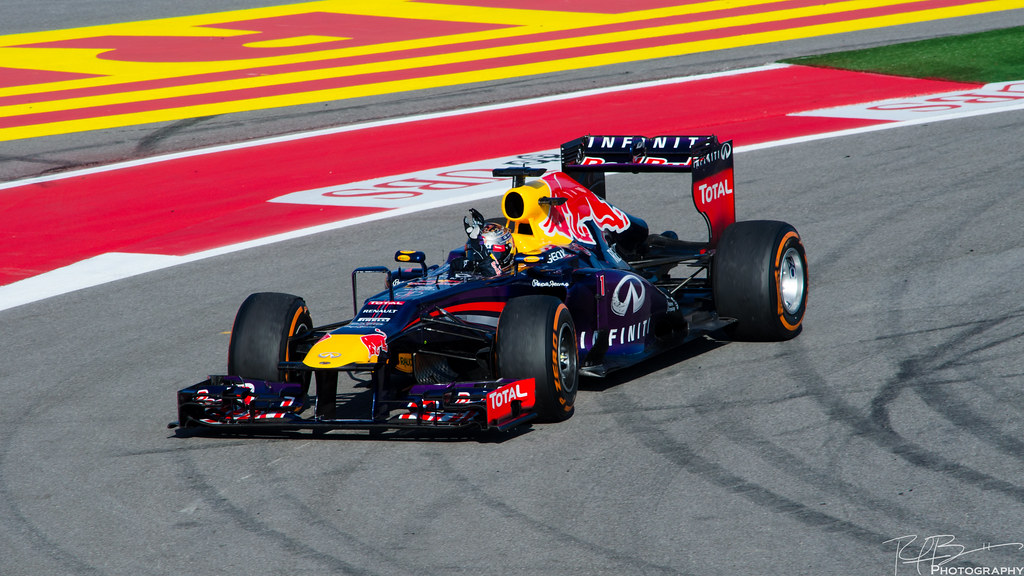 One of the cooler moments from the weekend came from the track marshals.  Mark Webber announced he’d be leaving Red Bull racing at the end of the year.  For the driver’s parade on Sunday, the marshals came out with at banner thanking Mark Webber for his time behind the wheel. 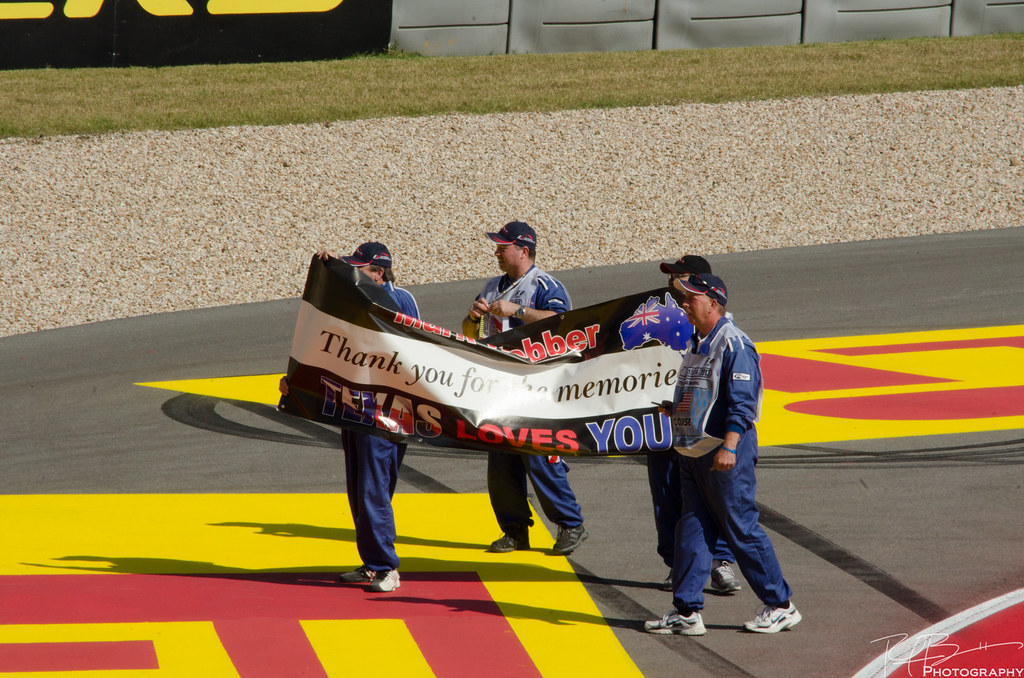 Oh…and per my contract, I’m obligated to include a pic of Jim and Kris at the race. 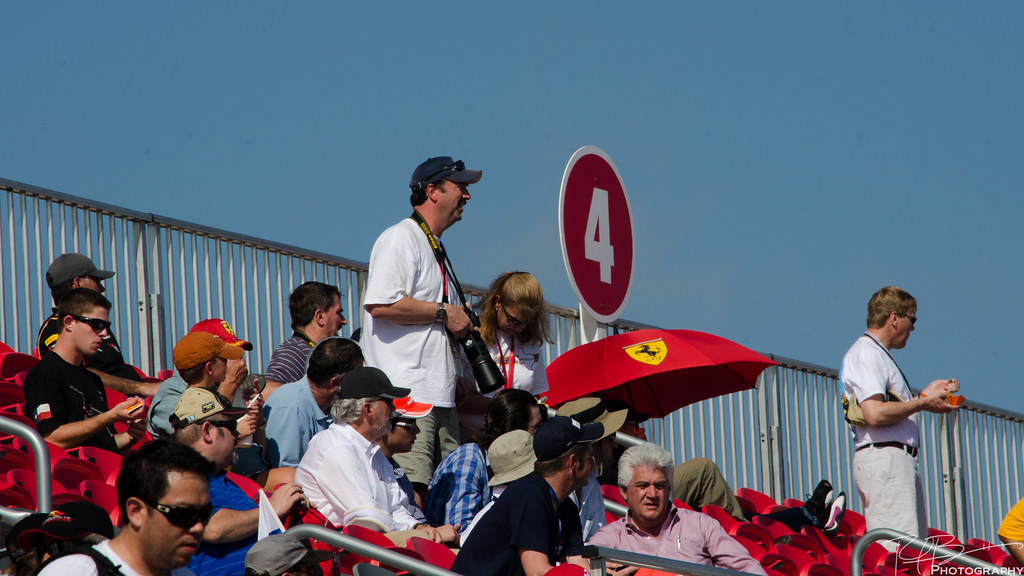 Again, through my relationship with Grand Prix Tours, I was asked to host some clients to the 2014 MotoGP race in Austin.  Having missed the 2013 race, I jumped at the opportunity.  I’ve never seen MotoGP and I thought it’d be fun.  And it was.  Tickets were quite reasonable, so I grabbed 2 sets and took my best friend Ted with me.   We had a place to crash at my sister’s place and only two GPT clients, so it all worked out.  Those two clients, a father and son from Seattle, provided some comic relief.  I didn’t know if these were two adults or a father and child.  So I packed Avery’s child seat just in case.  Much to my relief, when I picked them up at their hotel, two grown men hopped off the elevator and introduced themselves to me.

As always, it is just a joy to be at the Circuit of the Americas.  I wish I could tell you more about the race action on-track, but again the details escape me and I’m not entirely sure of the racers involved.  But it was incredibly cool watching the 2-wheeled machines fly around the track. 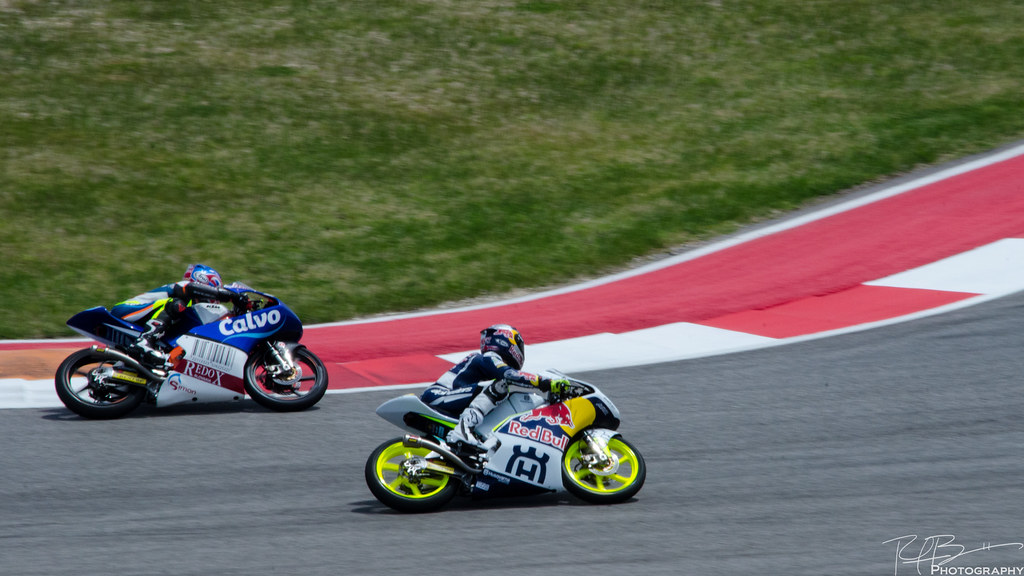 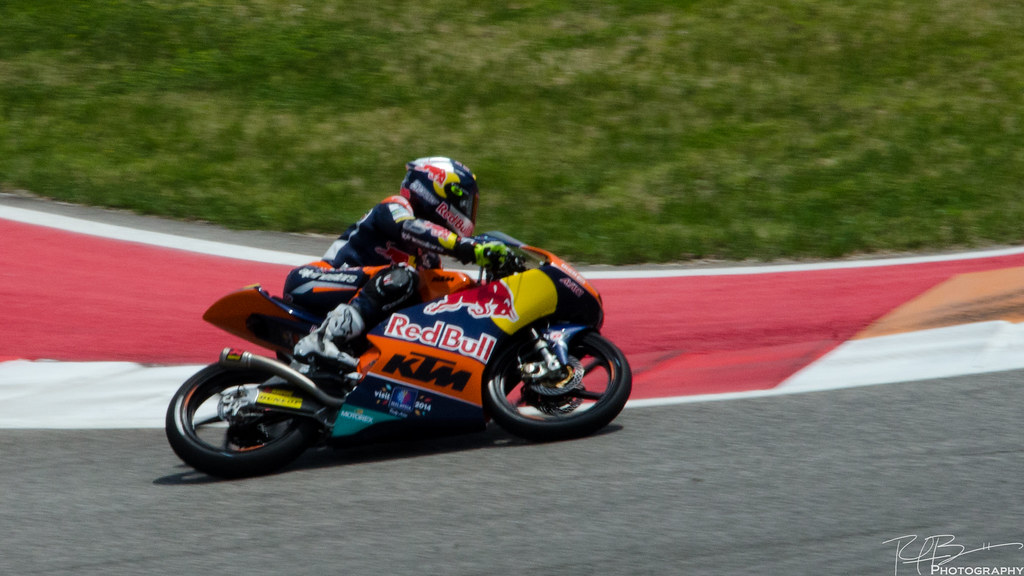 Just look at that lean angle. 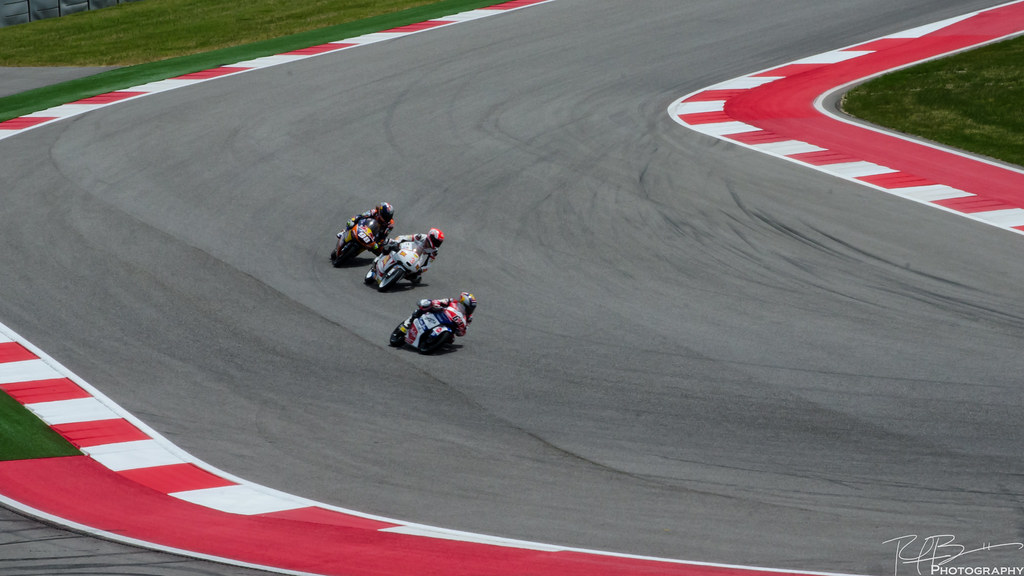 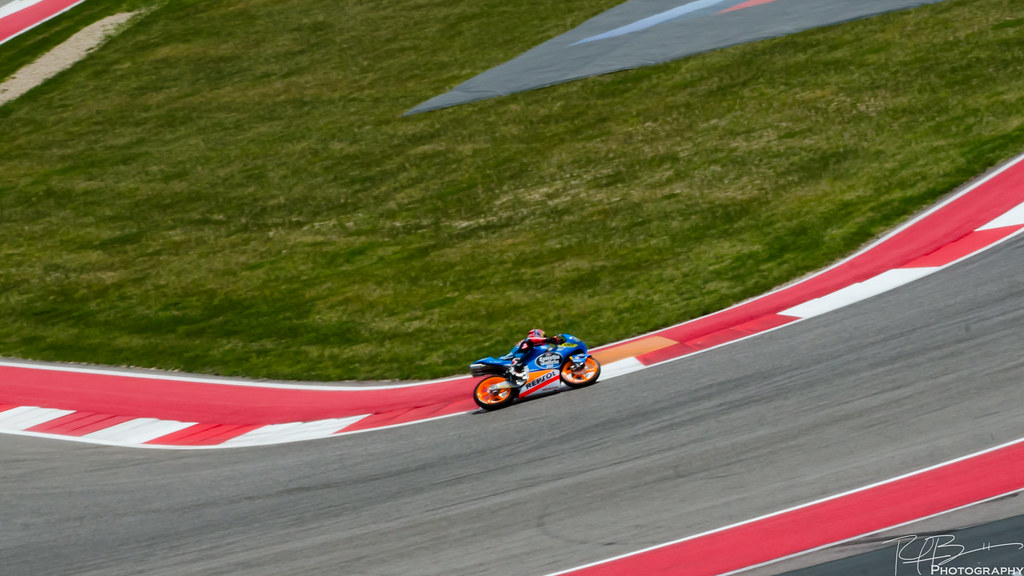 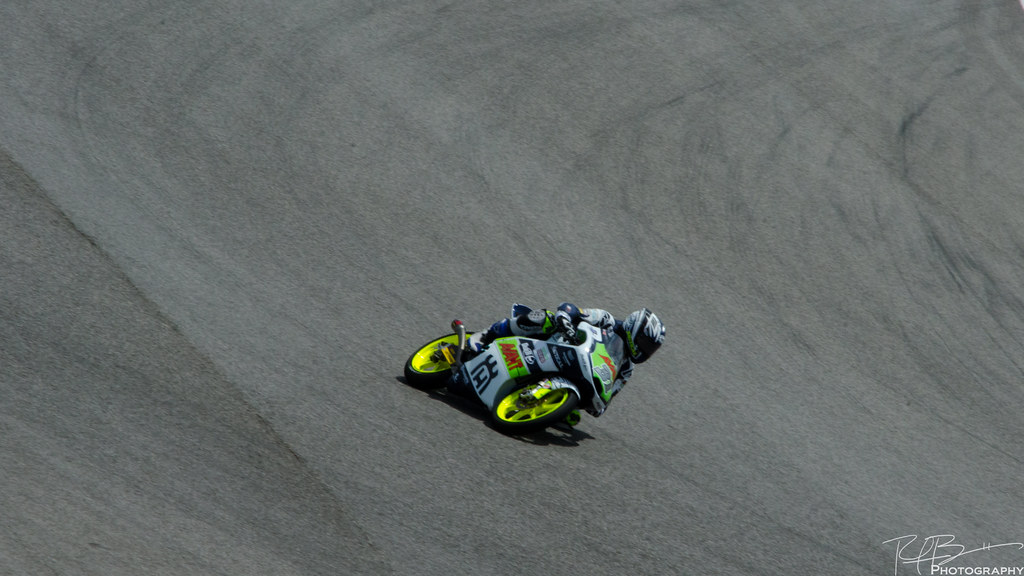 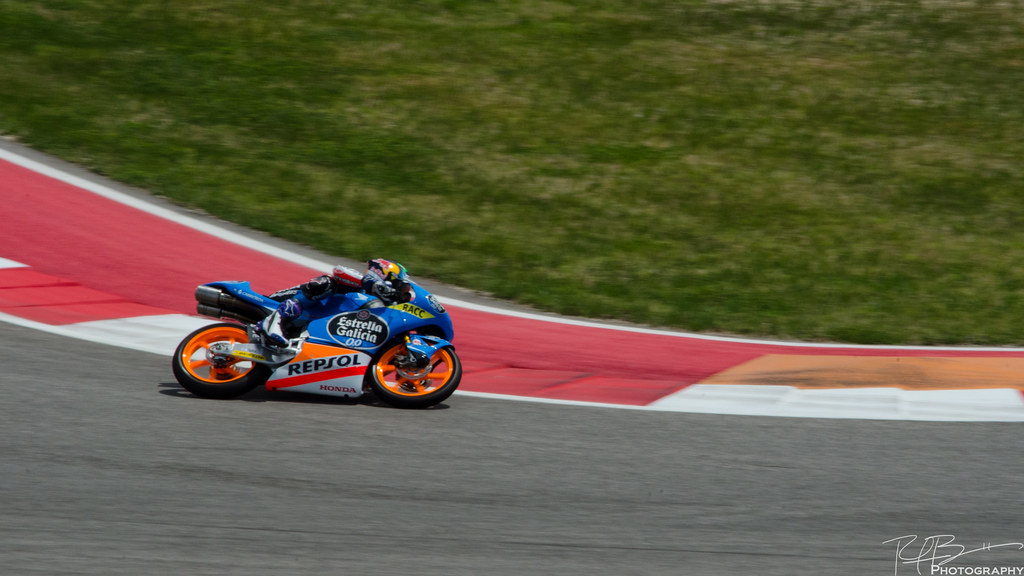 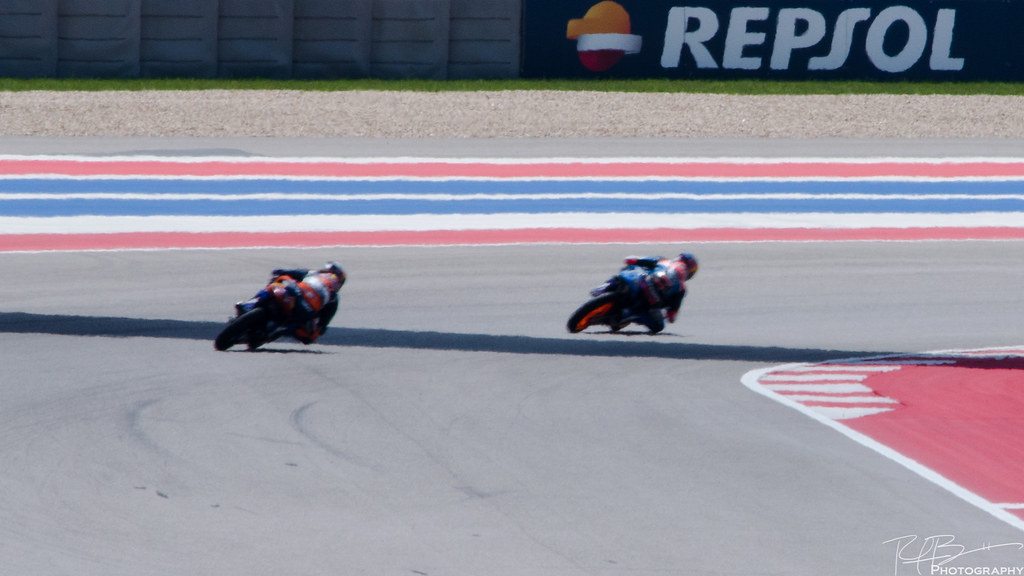 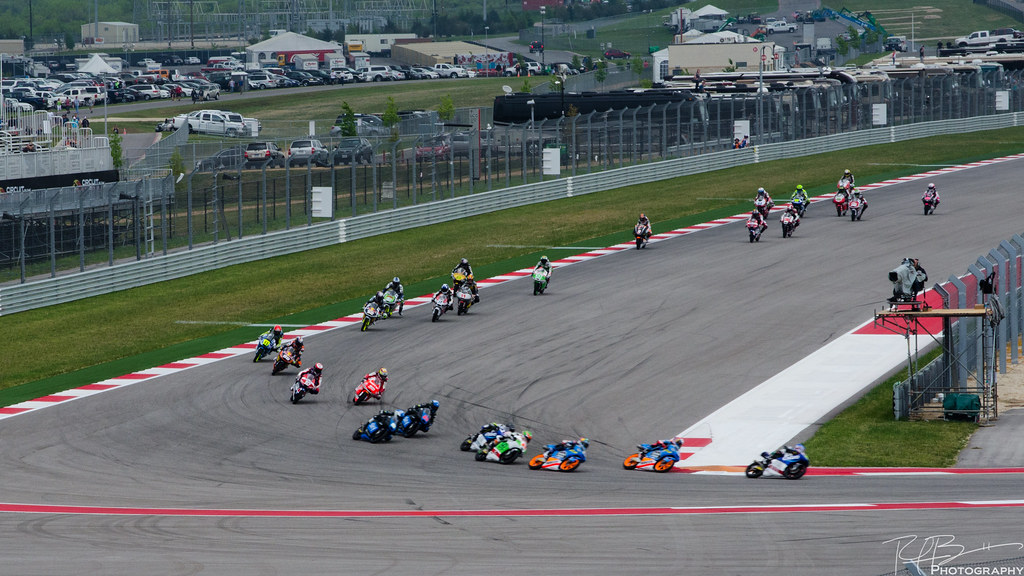 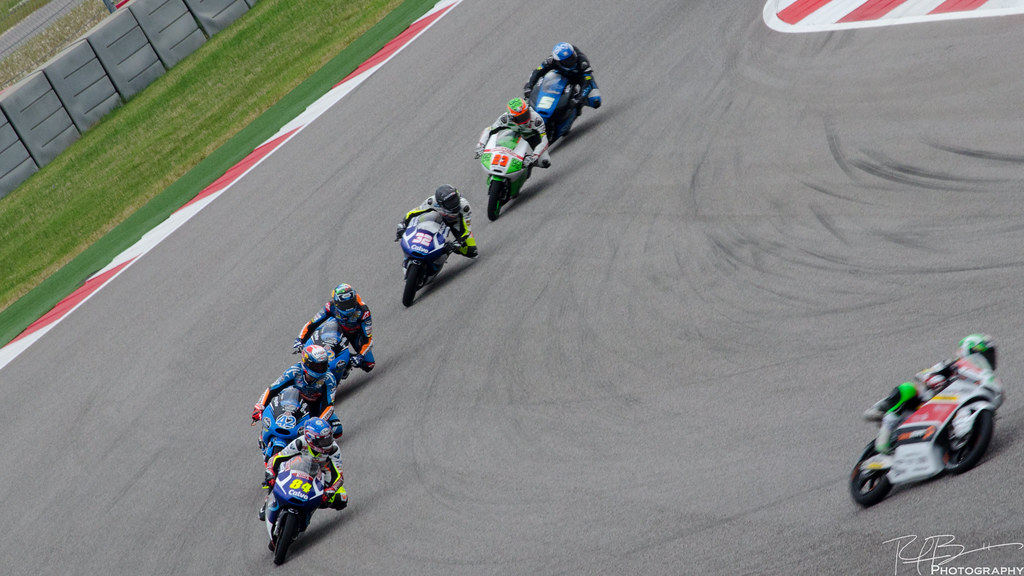 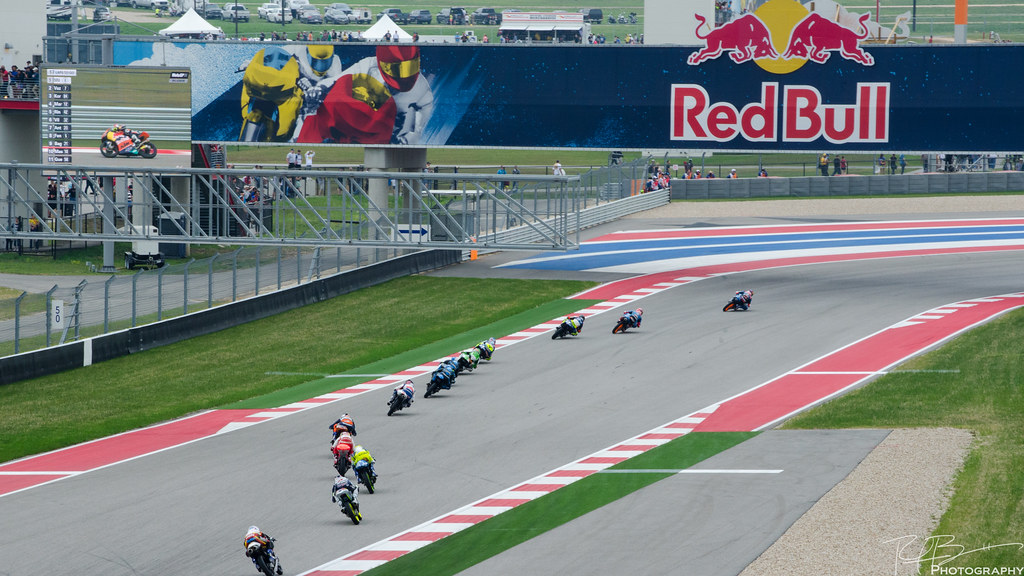 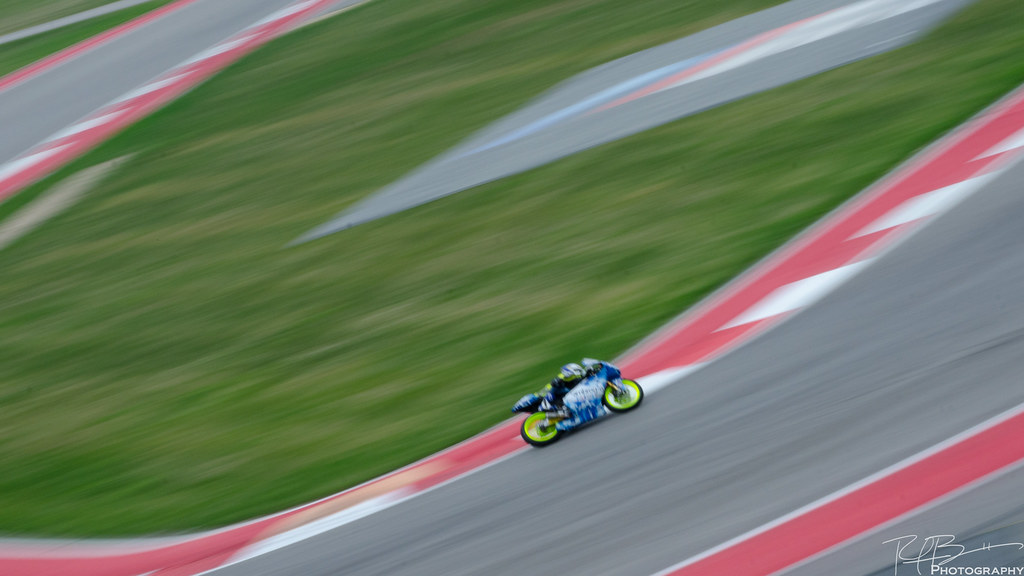 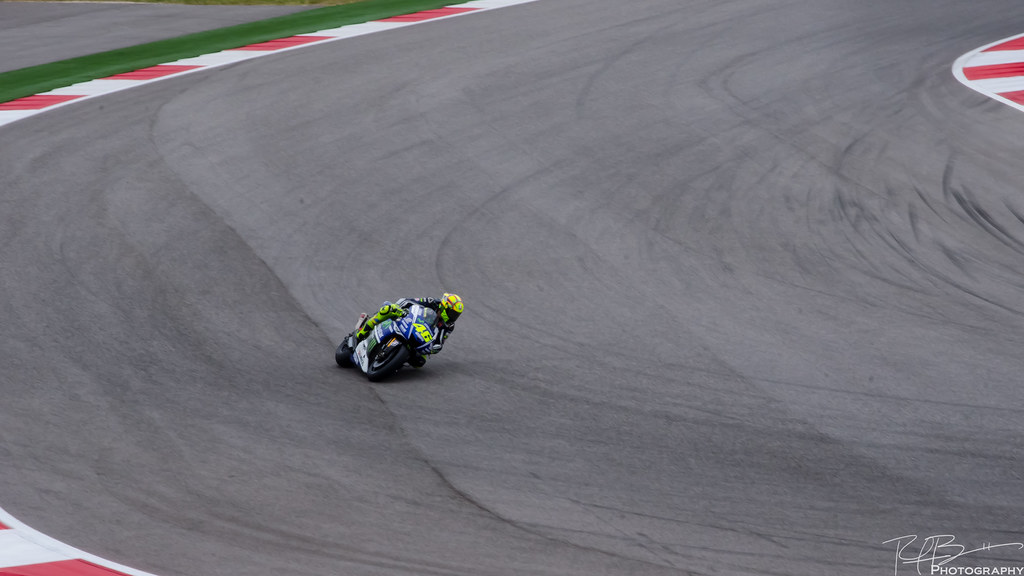 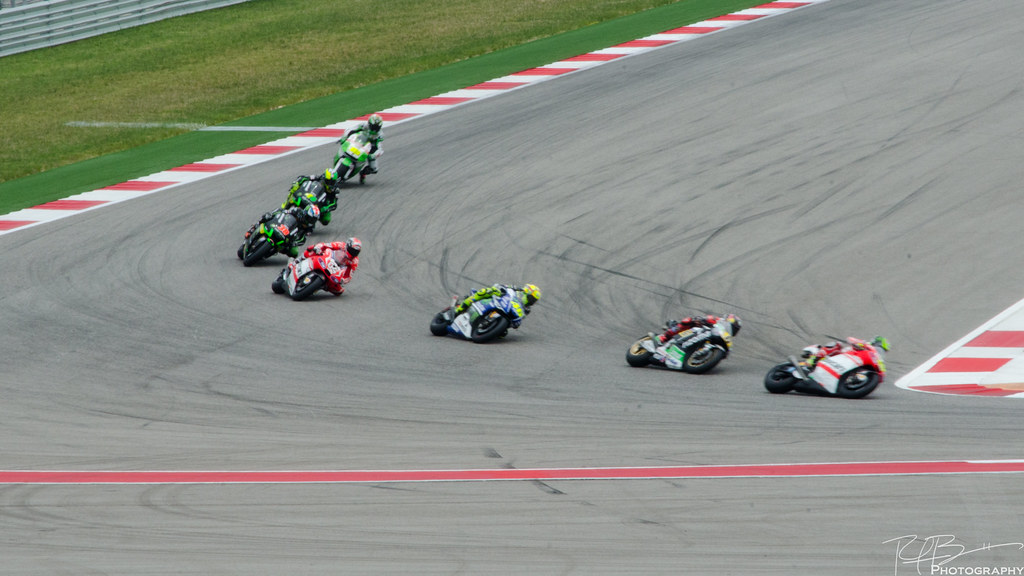 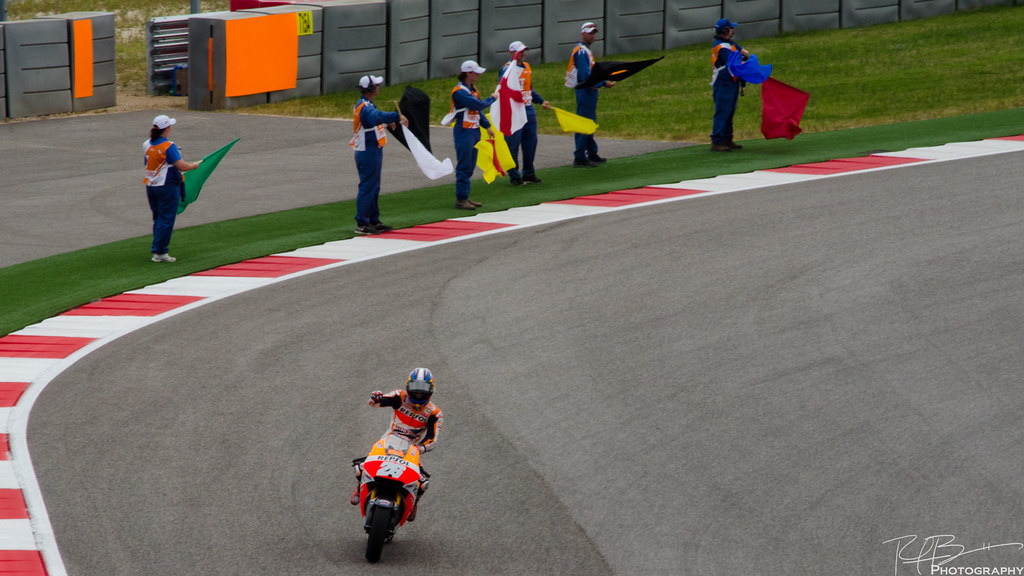 And that’s about it.  We had a great time at the race.  While not as parade-like at the F1 race, Marc Marques led the whole race.  Ted and I had a blast together and our clients were extremely cool.

I’m certainly not going to submit this post to the powers that be in terms of getting my media pass to the next race, but at least I got these done.  Next up, an interview with some passionate Le Mans fans, the 2014 24 Hueres du Mans, and the 2014 Lone Star Le Mans.